Nearly half (49 per cent) of the UK say they would make big changes to their diets based on what they read on social media, whilst two in five (41 per cent) are unsure of what makes a sustainable diet

Arla and its 2,100 farmer owners are encouraging the nation to look at the full life cycle of food and farming before making drastic decisions to remove entire food groups from their diets.

In a world where the pressure to fit in with the latest trend can often dominate over hard facts, new research shows that more than a third (34 per cent) of people in the UK admit to making choices about their food and dietary choices based purely on information from social media. In total, nearly half (49 per cent) said they would consider making a considerable change to their diet.

What’s more, despite a growing demand to eat more ‘sustainably’, two in five (41 per cent) of people are feeling confused about what exactly makes a sustainable diet.

The research carried out by dairy cooperative, Arla, highlights the need to balance the conversation when it comes to food and the health of our planet. Three quarters (75 per cent) of the UK are concerned for the future of the world we live in. But the rise in cancel culture is playing too much of an influence in the way that we make decisions relating to our diets.

Instead of relying on facts about the whole of the food production process and considering in detail what makes a sustainable diet and what food groups are ‘good’ for us, snap decisions are being made based largely on popular opinion. For example, nearly one in five (18 per cent) admit to relying on social media as a legitimate source of information, with 15 per cent saying they consume news through memes. The research also highlighted that over a third (36 per cent) have passed off opinions they’ve read on social media as their own.

Arla has found that the nation is split, with the research showing divided opinions on what makes a sustainable diet. Eating locally sourced food (54 per cent), swapping animal protein for plant-based alternatives (41 per cent) and choosing nutrition that has been produced with the least environmental impact (35 per cent) were amongst the top solutions cited as sustainable. However, although over a quarter (27 per cent) now think cutting animal products from their diet completely is the right thing to do, given the choice and all the facts, 65 per cent would prefer to drink dairy over dairy alternatives.

The dairy cooperative’s findings highlighted that Gen Z was, as a generation, feeling the most pressured into making diet decisions, with over half (55 per cent) confirming that they use social media to inform decisions. Nearly half (49 per cent) felt ashamed to order dairy in public in front of their peers. Although the data showed that 70 per cent of Gen Z would prefer to continue to drink dairy, an alarming 57 per cent plan to give it up in the next year. Almost a third (29 per cent) even admitted to only ordering dairy alternatives when in public, reverting to their favoured choice of dairy when in the comfort and privacy of their own homes.

This compares to 12 per cent of total consumers admitting to only ordering dairy alternatives when in public, and then reverting to dairy at home. And  almost one in ten (8 per cent), of people of all age groups, saying they are ashamed to order dairy with their teas and coffees in public, feeling pressured by their peers to choose alternatives.

Highlighting the way that our decision-making processes has changed, the research demonstrates the demand for facts to balance the dairy-alternative argument, with 65 per cent saying while they feel pressured to, they don’t actually want to give-up dairy. The findings of the report show a desire for a balance in the diet choices we make, rather than it being one or the other. In a bid to combat this, Arla’s 2,100 UK farmers want to explain how they provide so much more than nutritious dairy products and that having a positive environmental impact is not as simple as cancelling food groups entirely.

With 12 per cent considering the environmental impact of food alone when making choices, the role of nutrition in a sustainable diet is often left behind. As a growing population, the need to feed ourselves and reduce impact on the planet has never been more important. Yet many are willing to remove certain foods without considering the bigger picture, including food security.

Debbie Wilkins, Arla Farmer in Gloucestershire explains: “Dairy farming can often be misunderstood, particularly when snap decisions get made based on what we see on social media. When this starts to play a role in our decision-making process, particularly when it comes to our health and wellbeing, it’s important we take a step back and look at the whole picture. Considering things like, the love I have for my farm, for my cows, all nature, and the environment when viewing the industry as a whole.

The ‘all or nothing’ attitude so many groups and brands are pushing is not always necessary. It’s important to use the natural nutrition we have available to us, rather than relying heavily on processed foods.

Dairy farming is not as black and white as our beloved herds and it’s worrying how dairy can be so easily misunderstood. As an important part of our farming heritage, farmers are committed to nature - from protecting biodiversity, to acting as beacons of local communities and providing quality, natural and affordable nutrition to the nation. All food production will create emissions, but it is important to consider the nutritional value of the food as well as how it supports the natural environment.”

Graham Wilkinson, Senior Group Agriculture Director at Arla says, “We know that farming is not without its challenges and when it comes to dairy farming and the climate crisis, we have many hills to climb to reach our target of achieving carbon net zero by 2050. That is why Arla farmers are taking action and working to drive real change through several initiatives to reduce emissions, for a stronger planet for years to come.  As a cooperative, Arla has multiple farmer standards that we continuously challenge ourselves against, with everything from animal welfare, quality of our products and our environmental impact. We are constantly measuring ourselves against those standards to ensure our customers can trust that we are aiming for the highest quality products and adding this to the natural nutrition we can get from dairy.”

The next decade will be a defining one in the health of our planet and in the availability of natural and affordable food. Arla’s farmers already produce milk with around half the emissions of the global average and through Arla’s climate checks programme, are on a journey to reduce emissions even further - such as implementing slurry application techniques, used by 53 per cent of UK farmers, to help reduce air born emissions by between 30-90 per cent.

To find out more, visit https://www.arlafoods.co.uk/sustainability/sustainable-diets/ 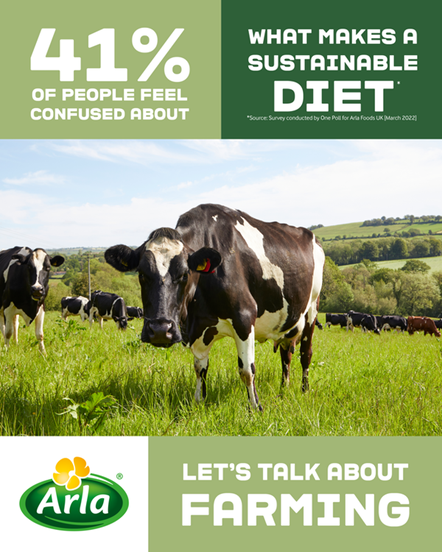