So much of the food we enjoy every day depends on pollinators (87 out of 115 of the world’s most consumed food crops needs pollinators, including just about all of the fruit and veg we enjoy in the UK) so it’s important that action is taken to halt and reverse the decline in some of their species.

As their habitats have been under increasing pressure over the years The Government’s National Pollinator Strategy was created to provide a framework to help protect and encourage pollinators around the UK.   While the Strategy has been in place for a few years now, practical support to help turn it into a reality has been slight, but as we enter Bees Needs Week, farmers from Arla, the UK’s biggest dairy cooperative, reveal the results of an initiative they have been working on with the support of a leading agronomist, Marek Nowakowski that could provide a valuable resource for pollinators and the wildlife they also attract.

Research has shown that five small, equally-spaced flower patches per square kilometre would mean all bees could reach a fuelling station.

Knowing that pollinators need to stop frequently and for short bursts to ‘top up’ their energy/feed, for the last two years a group of Arla farmers joined Marek to look at the best ways to create these ’pollinator pit stops’ with the overall intention of creating a nationwide chain of pollinator patches to serve as ’rest and refuel’ places for bees and other wildlife.  The trial sought to explore ways to serve the bees needs in a long term and affordable way for farmers.

Now, armed with the findings from this research, they have enough information to inspire and support the rest of Arla’s 2,400 UK farmer-owners to plant pollinator pit stops on their properties.  With each farmer in the trial dedicating half a hectare of land to their pollinator patches, that’s potentially 1,200 hectares – or 1,680 football pitches’ worth of space – that could be used to support this important wildlife.

The Arla Project Pollinator programme, part of Arla UK 360 Programme, means that the co-operative’s farmers are being given practical advice and guidance on actively supporting pollinators on their land with these pollinator patches for the first time since the launch of the National Pollinator Strategy.

Through the trial, made possible through the support of Morrisons and Aldi UK, the farmers involved have experimented with different methods for growing their pollinator patches. Some have given over whole fields, using the cut from the wild flower meadows to feed their cows, others have created meadow strips around grass fields that aren’t grazed and some have focused on unused land around the farm.

As the wildflower meadows now come into their second year, more than half of the farmers are seeing improved growth on year one and reporting an increased number of pollinators and small wildlife.

Graham Wilkinson, Director of Agriculture at Arla Foods comments, “Collectively, Arla’s 2,400 UK farmers have the size and influence to make significant changes that will increase wildlife across the UK. When it comes to habitats it’s about quality not quantity, which is why Arla’s environmental protocol encourages and assists farmers in increasing the number of essential wildlife habitats on UK dairy farms.”

The Arla trial findings take the risk away from farmers.

A key part of the trial was to establish whether the costs of running initiatives like this on farm were prohibitive to a broader roll out. Trial farms used a premium seed mix for 3 different grasses and 23 different wildflowers.  Research suggests the greatest wildlife rewards come from sowing such a mixture of wildflowers. While cheaper options can also provide some wildlife benefits Agronomist Marek Nowakowski, suggests that more complex mixes will help the biggest array of pollinators. The mix used by farmers in the Arla UK 360 Programme trial contained 20% wildflower mix and 80% grass mix.

Arla farmer Chris Jerman comments, “Switching between dairy farming and farming wildlife for pollinators is like asking a maths teacher to start teaching English as well. While many skills are similar, a completely different type of information is needed, so learning from the Agronomist Marek was vital in truly appreciating how much difference farmers can make. Initially it was daunting, thinking we would potentially loose land, and therefore money, but now I often look around my farm and think that area of grassland is not profitable or could be better used for wildlife. It takes extra time and effort from farmers, but when you see wildlife buzzing round the patch, it’s very rewarding. I hope every dairy farmer will at least consider if they can give pollinator patches a try on farm.”

Independent Agronomist Marek Nowakowski adds, “This has been a really interesting project to work on with Arla, made even more so by the fact the land on dairy farms is so incredibly fertile, sometimes too fertile for the wild flowers due to the natural fertilisers from the grazing cows.  This means we’ve really had to think about where we can get the best results with the seed mixes and which mixes yield the best results per location.  It’s great to see the impact the trial patches are having though and hopefully being able to share the findings and guidance with the rest of the farmers within the Arla cooperative we’ll soon have a buzzing network of pollinator patches across the country!” 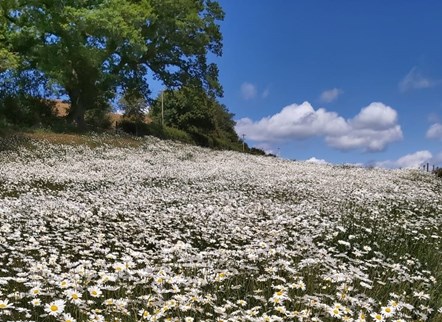