Brits don’t give a Buzz: 63 per cent of Hay fever sufferers say symptoms are ‘worth it’ in the name of nature

Over 2,000 Arla farmers are issuing an apology to hay fever sufferers after their successful Bee Road initiative has led to an increase in bee-friendly planting, and in turn, pollen, leading to more itchy eyes and runny noses this summer.

The nation sees ‘planting pollinator patches for bees’ as the most important to encourage biodiversity. However, with a whopping 45 million of us believed to be suffering from hay fever, many will be affected as a result.*

But it seems that Brits don’t give a buzz, with 89 per cent willing to put up with the symptoms, including runny noses and streaming eyes if it means supporting bees and biodiversity. And, nearly three quarters of hay fever sufferers are willing to plant more flowers at home.

After launching its nationwide Bee Road initiative in 2021, Arla, the farmer-owned dairy cooperative, is exploring what other lengths Brits are willing to go to, in the name of nature.

Whilst two thirds (63 per cent) went as far as saying that hay fever was ‘worth it’ for nature, a further 85 per cent said they didn’t mind the symptoms disrupting activities like having a picnic knowing that the extra pollen was helping biodiversity.

Even outside of the hay fever sufferers, two thirds (67 per cent) of the nation are in agreement that we need to do our bit for nature, even if it makes life a little bit more difficult.

Over a quarter (28 per cent) of respondents are taking part in ‘no mow May’ this year and over half (54 per cent) are happy to let their lawns grow wild. And our bugged-out altruism doesn’t end there. Arla’s research also found that our efforts continue, with 88 per cent saying they have also added bug hotels, bird feeders and bee pollinators to homes and gardens to do their part.  One in five (23 per cent) even went as far as to leave logs out to rot to encourage creatures like stag beetles.

As the nation’s awareness of the importance of pollinators grows, with over half 57 per cent now connecting them with many of the foods we eat every day, nearly a third (30 per cent) wouldn’t know what to do if they spotted a bee in peril. Some even said they would simply do ‘nothing’.

We still have a bit to learn, with a worrying 26 per cent saying that if they saw a bee floundering on the floor, they would ‘put it out of its misery’ or just ‘nudge it off the path’. And only one in five (21 per cent) claiming that their garden is completely bee friendly.

Surprisingly some even say they’d be happy to put up with ‘bugs flying around their BBQs (20 per cent)’, ‘worms near them on picnics (20 per cent)’ and even ‘increased bird poo (21 per cent)’ if it means helping the planet out in the long run.

However, the research found that we aren’t willing to put up with all creepy crawlies in the name of biodiversity, with wasps, woodlouse, flies and bluebottles topping the list of bugs that ‘bug us’.

The research highlighted that a third (33 per cent) still aren’t aware of the crucial role that famers play in supporting biodiversity or how important bees are in the fight to save our biodiversity (20 per cent).

Graham Wilkinson, Vice President of Agriculture from Arla says “We know how important pollinators are for nature, given that around a third of the food we eat relies on pollinators such as bees - which is why last year we launched The Arla Bee Road. The initiative aims to help everyone to grow and improve pollinator habitats however big or small, by joining our farmers and planting pollinator pit-stops to help bees and bugs travel around the country.

“An incredible 120,000 households joined us last year, planting pollen-rich wildflowers. So, while the bees are loving it, we know that many humans are reaching for the tissues and sunglasses to soothe their hay fever symptoms. We are sorry about that, just not that sorry!”

The Bee Road initiative is aimed at building a nation-wide network of specially planted pit stops to help pollinators, such as bees, move around the country pollinating the plants that produce the foods that we love providing plenty of spaces to rest and refuel.

With 58 per cent of the public wanting to do their part but not knowing where to start, Arla’s farmers, who are continuing to dedicate areas of their land to grow special seed mixes for pollinators, share details of their ongoing Bee Road work (here) as well as tips and tricks to get started.

For those keen to put the bees’ needs first, Arla farmer, Chris Jerman, shares his thoughts, “If you’d like to get involved and support biodiversity too, and join the Bee Road, here are a few tips and tricks to get you started”:

For more information on this story and Arla’s wider sustainability work, please contact the team at Arla.UK@hkstrategies.com or visit www.arlafoods.co.uk

Arla Foods is a global dairy company and cooperative owned by 9,700 dairy farmers with circa 2,100 of whom are British.  With production facilities in 11 countries and sales offices in a further 30, Arla is the world’s fifth largest dairy company and largest supplier of organic dairy products. Arla has a total of more than 18,000 colleagues and its products are sold under the well-known brands Arla, Lurpak and Castello in more than 100 countries. 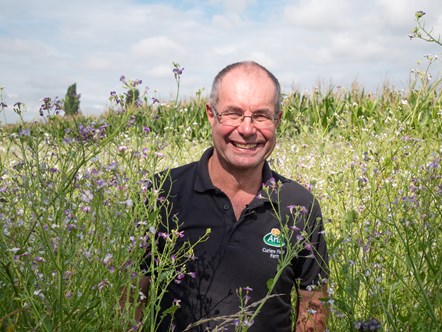